As noted by ICON Architects on their website, The Residences at 25 Morrissey Boulevard is starting to get its own identity in the form of an official name: Hub 25. The 220,000 square foot building of 278 rental units is under construction in Dorchester and it seems like they are looking to brand the product.

This location is a commuter’s dream adjacent to the JFK Redline station, which offers bus, train and commuter rail services. The project will consist of two 5-story buildings and will consist of a mix of Studio, 1 & 2 Bedroom Units. As areas in the city such as South Bostonand the South End have increased demand and therefore increased rents, this Dorchester location could be a great alternative for young professionals and students alike. Suffolk and UMASS Boston especially like this area. Rents are expected to range from about $1,500 to $2,500 per month. Compared to something like Troy Luxury Apartments where rents start in the low $2,000’s and can get close to $4,000.

The construction by Dimeo has been delayed due to the winter that we all had to endure but things are expected to be back on track as the warmer weather approaches. This is just another part of a 20-year plan to really revitalize the area. Just last week President Obama was in Dorchester for the dedication and opening of the EMK Institute on Columbia Point.

Dare we say…The Dot is Hot? According to Zillow Rentals there are currently 91 rental listings ranging from $1,000 per month for a studio to $4,250 a month for a 5 bedroom. The additional 278 apartments right on Morrissey Boulevard will definitely bring a lot of buzz to the hub. 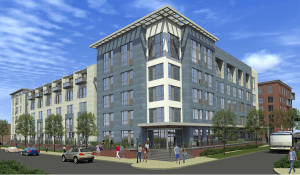