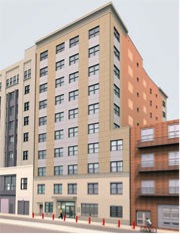 Low income housing is being offered at this new construction site in Chinatown. The project is due to be finished in the summer of 2015!

“A $26.6 million investment, Oxford Ping On broke ground in May. Developed by CEDC Oxford Ping On LLC, an affiliate of the Chinese Economic Development Council, the building will replace a 6,400-square-foot paved parking lot at the intersection of Oxford and Ping On Streets in the Boston Empowerment Zone…Rising ten stories above ground, Oxford Ping On was designed by Chia-Ming Sze Architect, Inc. and will encompass approximately 60,000 square feet of space. When fully completed in late summer 2015, the asset will have 67 low-income rental units consisting of 48 studios, 16 one-bedroom units, and three two-bedroom apartments, with one one-bedroom unit set aside for the property manager.”