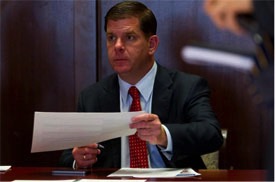 Mayor Marty Walsh is calling for even more new housing in Boston.  Despite all of the residential construction that has been going on for the past few months, it looks like the trend will continue. Walsh intends for the additional housing to be aimed at the middle class to fulfill a demand that has not been met.

According to the BBJ, “the initiative calls for a number of government-financed plans, its primary thrust is increasing incentives and options for developers willing to build apartments and condominiums targeting families with incomes between $50,000 and $120,000. The emphasis on middle-class housing is unusual for a large city, in part because government housing funding has tended concentrate on families with lower incomes.”

The full article is viewable on the Boston Business Journal.