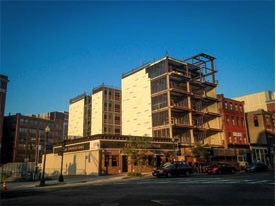 Great news for Boston residents and business employers: Our Mayor recently disclosed plans of developing 53,000 more housing units in West Broadway. This development will lend a surplus of housing availability to current and future city residents, accommodating the forecasted 15-percent increase in the city’s population. With the rapid urbanization trend coming afloat, more housing availability will lead commuting to be of the past for the future Boston employed, raising grins amongst their business employers.  Construction is expected to begin this summer and completion, a.k.a. units, will be available for grabs upon year 2030… something to keep in mind as you’re sketching your place of residency plans within the next decade!

According to Curbed Boston, “one of the big end goals of Walsh’s plan is 20,000 units of middle-income housing via incentivizing developers with looser zoning regulations and tax credits. Right now and for the foreseeable future, however, it’s much more profitable for developers to build higher-end apartments and condos, the sorts that rent and sell for near-Manhattan-esque tags. The market’s reward seems to far outweigh anything City Hall could offer. To truly make the building of less expensive housing worthwhile for developers, Walsh would have to ensure the city curbs the costs of construction significantly.”

You can read the full article, here.