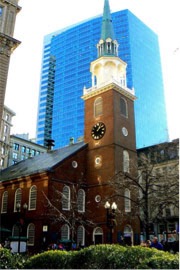 Millennium Partners, otherwise known as the developers of both Millennium Place and Millennium Tower, have vowed to contribute to the preservation of Boston’s Old South Meeting House.  The location where Millennium Tower will soon stand is only one block away from the landmark building.  Although the new 60 story condominium tower will undoubtedly alter the skyline of Downtown Crossing it is reassuring that some of the historical elements of the neighborhood will remain intact.

From the Boston Business Journal:

Millennium Partners’ “donation resulted from conversations between the development team and Old South staff who had expressed concerns about construction impacts on the 285-year-old brick building. The funding will bring 21st century improvements to the 1729 National Historic Landmark, including enhanced energy conservation, new interior lighting and a digital sound system to support the many programs and performances that take place in the hall year round, Old South said.”