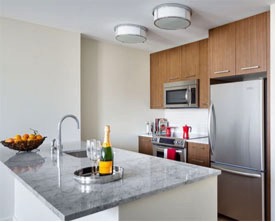 The Arlington in Back Bay is one of the most luxurious apartment buildings in all of Boston. The luxury apartments are going quick, so take advantage of these beautiful units in coveted Bay Village soon!

“The 128 apartments of the Arlington in Bay Village started dropping back in late February for gobsmacking rents such as 1-BRs for $4,215 and 2-BRs for $6,200…60 percent of the Arlington’s units have been leased in the last four months, according to the developers. The remaining 1-BRs start at $3,800 a month and 2-BRs at $6,200”

The rent also includes amenities, like a 24-hour concierge, indoor basketball court, and a spa for pets.